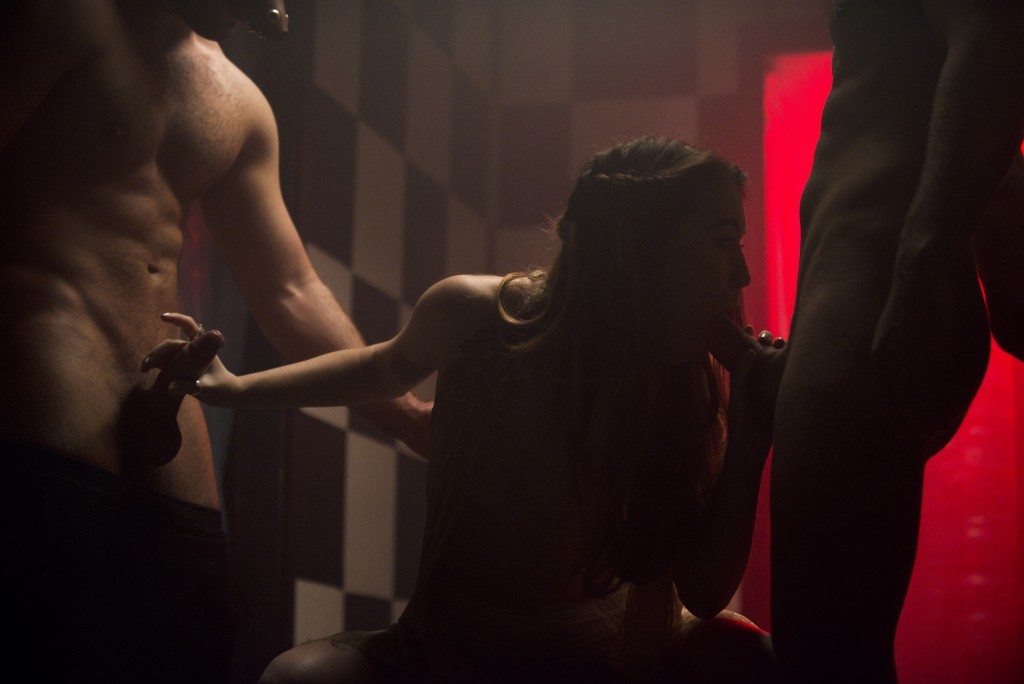 …but all the problems I have with Lust crop up in abundance: solid concept hindered by uneven/lackluster execution.

I think the problem–besides the fact that her grip/gaffe team can’t set up lights fer shit (sheesh, invest in some softboxes and close down that key light by 2.5 stops)–is that Lust seems inherently preoccupied with subverting the male gaze typically associated with pornography.

She does this by soliciting fantasies from women which she then enacts for her cameras. Take Pansexuals, it treats a group sex scene in a typically porn-trope turn by using strip poker as a throw away plot device. That’s something I’ve never understood–strip poker is such a means of symbolically addressing power dynamics, creating tension, building anticipation. In essence, the game itself is a chance to hone the subsequent eroticism, to contextualize it. This seems to skip over all that to hurry up and get to the fucking. (Watching this I felt exactly like my 16 year-old self fast forwarding to the parts that got me the wettest.)

So while: yes, I’m always going to support a FFMM group sex scene that skews full on gay once your too far into it to back out. (I love shit like that because as I’ve said if you like watching people fuck, you should be fine with watching people who don’t fuck like you in the process of finding representations of people who do fuck like you), I do think everything about this scene is almost to awkward to even be sexy.

I mean sex at it’s best is always a bit awkward and group sex–in my admittedly limited experience–tends to be awkward. So I feel like maybe kudos for being honest in the depiction?

Truthfully, though I don’t think it’s the right kind of awkwardness. Like in this scene it’s Ermagerd Girl level awkward. And really, it’s usually more tender, idiosyncratic and charming.

Also, I’m reminded of Pina Bausch’s prompts designed to get her dancer’s to enact a mood or desire:

You know that feeling you get when the idea behind something is solid but the execution just isn’t up to snuff? That’s how I feel about Erika Lust.

Completely discounting my opinion of TED (hint: it’s hardly rose colored), it’s an awkward, halting ramble/rant all but devoid of any dynamism.

That’s not to say I dislike her videos. The concept underlying her XConfessions series–of which the above scene is a part–invites folks to share their fantasies with the video makers. Subsequently certain fantasies become prompts for explicit enactments. (I’ve featured another XConfessions scene I Wish I Were a Lesbian previously.)

The thing that bothers me–and I haven’t seen the entire scene but I’m guessing from my reaction to I Wish I Were a Lesbian, I’m almost certain my instinct is on point: it may be pretty and resonate with me but Lust demonstrates some astounding technical lapses.

Back to the above scene. It’s pretty–nice warm light. I’d like to have seen this same shot in a wide master, but I’ll grant that’s a matter of personal taste. It’s the fact that this embodies a style of lighting that I detest. A set lit with stylish practical lighting and then a super hot theatrical spot overhead which emphasizes the action.

It’s this sort of hyper stylized lighting focused on cheap and easy effect. And it’s becoming endemic. (Netflix Daredevil is an–what’s the opposite of glowing?–opaque; what the fuck were they thinking shooting some of those scenes so goddamn impenetrably dark. It’s awful.)

As a counter point–Blade Runner presents an endless stream of pitch dark vistas–but unlike most of the lighting in Hollywood fare these days–what light there was was always thoughtfully shaped/sculpted so as to be legible to folks sunk into their seats in darkened theaters.

It’s like I teach my students in lighting workshops: you know the classic quip where the petulant veteran actor demands the hotshot young directory what’s my motivation? Good lighting is–more often than not–logical motivated by the augmenting of existing, naturally available light or illumination provided by extant light sources.

To preempt the standard objections, no David Lynch isn’t a fucking excuse, shit bird. You clearly haven’t watched his films with any sort of detail oriented eye because that man is a goddamn master at selling hyper stylized lighting and the reason he’s so good at it is because it’s logically motivated by light sources you can see in the frame.

In theory, Erika Lust’s approach to making pornography–outlined in her oft referenced TEDxVienna speech–appeals to me: an emphasis on context (characters are more than the performance of their respective sexualities) and diversity of modes of sexual expression are all v. on-point.

Which is not to say that the above scene is without certain moments. Placing equal emphasis on graphic depictions of sexual expression and the physical response to those depictions is unquestionably inspired. However, those moments are ultimately diminished when they are spliced together in such a rough-shod, pretentious fashion.

And it’s entirely possible that I am putting too much emphasis on the fact that this scene was shot handheld. The current preponderance of handheld camera work in motion pictures is an enormous pet peeve of mine since with the exception of Lars von Trier (who is preoccupied with using a subjective cinema-verite approach in combination with editing to stylize ellipses of perception by a fly-on-the-wall observer) or the Dardenne Brothers (who have pushed subjective handheld cinematography to something perhaps not objective–framing necessarily precluding questions of inclusion/exclusion–but unblinking and entirely unselfconscious), there is a total obliviousness to the history and functionality of handheld camera work.

Granted, I haven’t seen the full scene but the excerpted clips suggest that the handheld nature of the shots is intrusive–it is supposed to be noticed. The audience exercises some sense of active voyeurism, a passive co-authorship. And while, yes, this arrangement allows for scenes like the young woman’s face in the third frame from the top and the lubing up of the strap-on in the sixth frame from the top, my response is that any narrative motion picture instructs the viewer how it is supposed to be seen in the first third of the first act. The expectations that this film establishes are cribbed from art-house/international cinema but it can’t follow through in execution once it arrives at the place where it’s always intended to be.