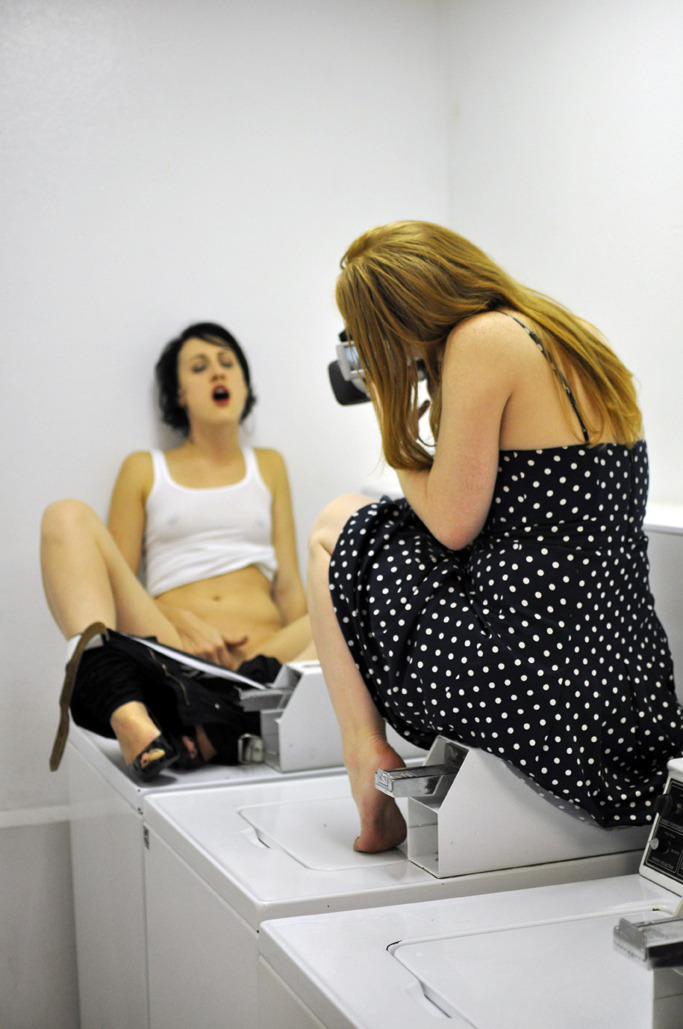 Coming from a conservative Xtian high school where boys were expected to be boys interested romantically but not sexually in girls who were girls—wholesome, chaste and asexual—such openness was refreshing but also a little unnerving.

Instead of mirroring, this image employs a surrogate to de-emphasize exhibitionist facets, underscoring the voyeuristic intentionality. A beautiful young brunette leans against a wall while sitting astride a washing machine (which I imagine is mid-spin cycle). Bokeh renders her in blurred focus: her pants pushed down around her shins, her legs and bares knees akimbo, right hand reaching down across her taut stomach, disappearing between her thighs; erect nipples showing through the thin white cotton of her t-shirt and an expression that is a bit of a Mona Lisa smile– somewhere between feigning orgasm and the actual shift where realization dawns that orgasm is imminent.

A young woman—barefoot and clad in a blue sundress with small white polka dots, has climbed on top of the row of washing machines also and monitors her friend with a video camera. Her face is hidden by her long golden hair. She seems thoroughly engaged with her friends experience.

The videographer is in sharper focus than her friend but the sharpest focus is reserved for the foreground. This is fascinating as you essentially have the exhibitionism of the masturbator cancelled out by the videographer’s surrogate voyeur which is subsequently transformed once again into an exhibitionist tableau in turn cancelled out by the depth of field’s inferential reminder to the audience that they are voyeurs.

With that in mind, I must mention that skinny frame contributes NOTHING to the image. Whereas, a landscape orientation would have firmly placed the happenings within a public laundry facility; more fully integrated the lines of molding in the lower left of the frame and the darkening far corner above the videographer’s head into the compositional logic of the image and further emphasized that depth of field by including the foreground washing machine; not to mention, you wouldn’t lose the tail of the blue polka dot dress which would further balance the weight of the masturbators naked right knee.

All things considered this is a goddamn gorgeous image succeeds in its own right but truly shines by what it manages through implication. Less is more, after all (and always).