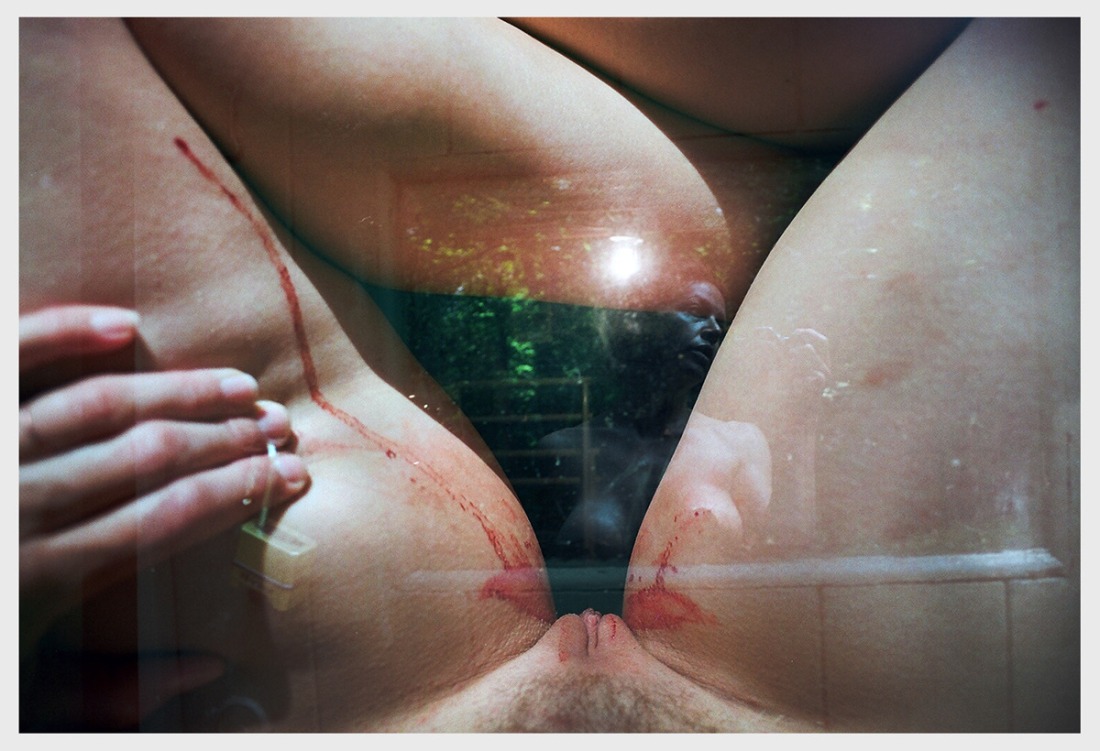 ‘And in this vision

the present is also revealed as a ruin.’

More often than not, articulating what’s going on in my head is like trying to fit an iceberg through the eye of a needle.

It’s like I see 300 images compressed into three seconds and I have to recall every bit of it with eidetic specificity.

With this image what I can remember runs something like: ugh, multiple exposures; and, must Art always be goddamn sexist, there’s what, centuries worth of images featuring featuring women as essentialized, sexual objects but how many images can you think of where a female bodied individual is portrayed as a someone with a vital inner life independent of what a man thinks of her or the audacity to—clutch the pearls—depict menstruation; and, what would Szarkowski’s reductive Mirrors and Windows make of this?

The enormity of seeing the original thought surface, the marvel of its intricate perfection is all but lost.

My recall is sometimes astounding. I live for those moments.

During the remainder of the time, its like guessing at the original picture based on nothing more than a handful of puzzle pieces.

Occasionally, the pieces lead to more pieces. Given enough time, I can confidently point to an approximation of that first notion. Most of the time though, I can’t.

At which point I am left with the choice of giving up or trying to say something that manages to make sense of the pieces I have and hopefully points however glancing toward what I want to say.

Stories, I have learned, are a valuable tool in this process. Telling a story doesn’t always turn up more fragments. But it frequently triggers additional moments of astonishing clarity.

It doesn’t feel like there is a connection but I feel compelled to talk about how I discovered Matlock’s work.

Usually, I attribute my motivation to buy my first 35mm SLR to encountering her work. But that’s personal mythology; not the truth.

At the time, I was in film school studying cinematography. The summer between my junior and senior year was the first time I was not scheduled to shoot anything for anyone else and couldn’t afford to shoot anything of my own. So despite knowing nothing—less than nothing: fuck all—about still photography, I snagged a Nikon 8008s with a 50mm f1.4 lens. The salesman had to help me load the first roll of film.

The first handful of rolls turned out better than I had any right to expect. And after being prodded by my ‘adopted’ sister, I put some of my stuff up on Flickr. (This was back in the days of the simpler, more elegant interface and with it the now long gone pervasive sense of community.)

Part of me relished nominal attention my photos received. I likely would have bored of it, if it hadn’t been for the Explore feature.

After about six months of shooting, I hit my first plateau. The magic was far from gone but the process had begun to feel like work. It was that dead man’s land between Thanksgiving and Xmas and in combination with my frustration with my photographs, extremely loneliness and handful of other mitigating circumstances, created a perfect storm during which I stumbled onto Matlock and Ashley MacLean’s collaborative work under the moniker tetheredtothesun.

I remember distinctly that this was the first image I saw. Seeing it produced a feeling identical to the moment of surfacing, of mental clarity. Only, the three second time limit had been lifted. I could sit and stare; wonder at it all. Dwell there for a time.

I cannot understand how everything in my life since then has hinged on the flipping of that switch. I still don’t completely understand it. But it opened my eyes to the fact that the work I was making ran contrary to what I longed to create. Further, it lacked willingness to be vulnerable to others.

It’s not especially clear but the original thought I wanted to write about here was a bit of an extended metaphor. Something to do with the way parents track their child’s growth with pencil marks on a door frame. So much of my own creative development lines up in my mind with photographs Ms. Matlock has either helped to make or made herself. (I will write a goddamn dissertation of a post if I ever manage to track down her photo of Smashley titled something ‘a well-explored room’,.)

I don’t get her multiple exposure work. It doesn’t move me in the same way as her more candid images.

Matlock was recently interviewed by The Photographic Journal. Reading it I was reminded of how influential her work has been in my development as a photographer. It’s simultaneously thrilling and unnerving.