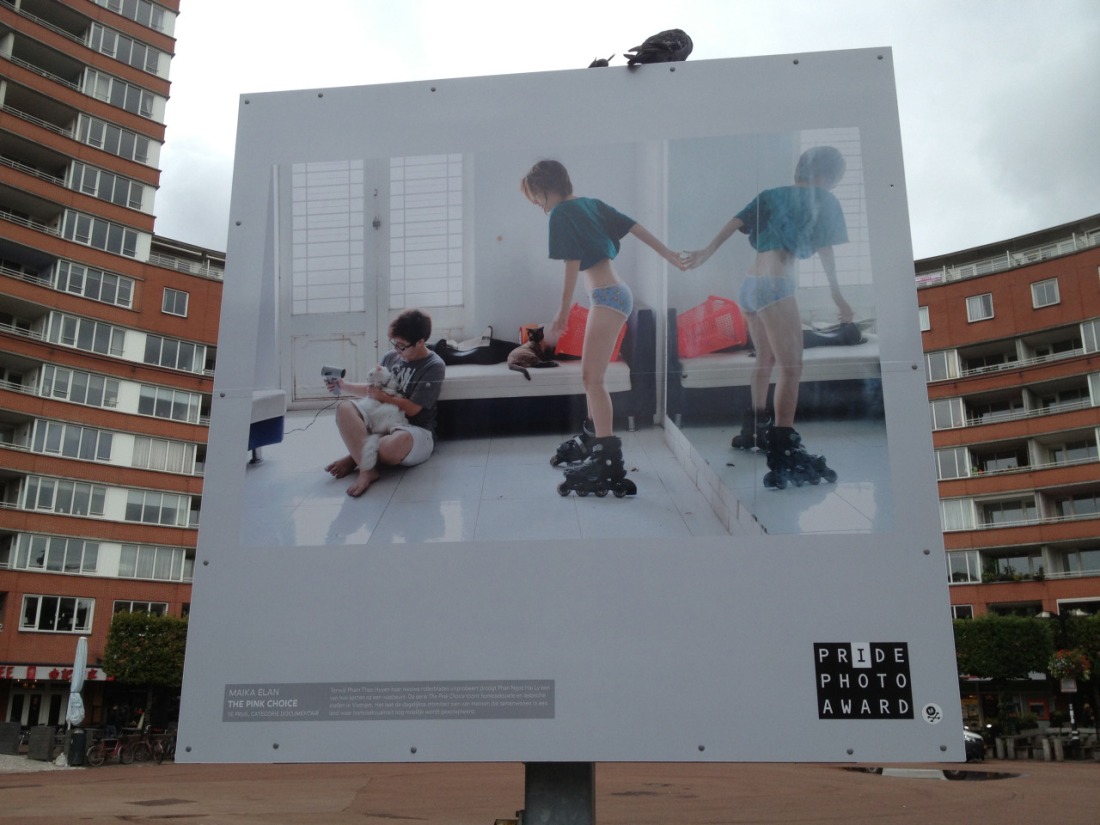 While in Amsterdam, I happened upon this billboard proclaiming Maika Elan‘s 2013 Pride Photo Award win under the documentary category for The Pink Choice (2012).

I nearly walked right by it as I was stoned, ravenously hungry and reasonably well on my way to getting drunk–not to mention it being tucked away in the plaza abutting the Heineken brewery.

Somehow, the bare legs of the young woman balanced on roller blades snagged the corner of my eye from across the street.

Upon closer inspection, my first thought was this belongs on my blog. I retrieved my phone and snapped several images of it.

Two months later, I don’t question my instinct to share this: it belongs alongside the other images on this blog. Still, I am hesitant to post it. Why?

My initial thought was including the image would provide a great occasion for a sex positive, yay-for-gay post. Now this strikes me as a naive notion at best and more likely disingenuous, lazy and intellectually dishonest.

Being ostensibly a sex blog  I don’t think it’s a good precedent to take the path of least resistance especially when to do so overlooks the fact that what initially fired my curiosity about this image was essentially libidinous– a young woman in her underwear.

As much as that is a problem–the cultural prerogative of sexualizing the female body–it isn’t the image’s problem; if anything, Elan succeeds by offering the viewer so many diverse avenues of approach: attraction, narrative, absurdist humor (seriously, wtf is up with blow drying the cat + who roller blades in doors), inversion of the mundane (aka whimsy) as well as a sense of authentic experience.

And it’s not really something I know how to other than to point out that despite what drew me to the image when I finally turned and lopped south, away from Marie Heinekenplein, I was struck by two realizations: first, I was now just as attracted to the second woman as the one wearing the roller blades– or perhaps more accurately attraction had blossomed into curiosity about them, the nature of their relationship, how they interact with one another, etc.; second, as a terminally unrequited individual, I am frequently and bitterly jealous of ‘happy’ couples, but while this image did make me feel a little sad, it also made me strangely grateful to be alive in a world where love is possible.