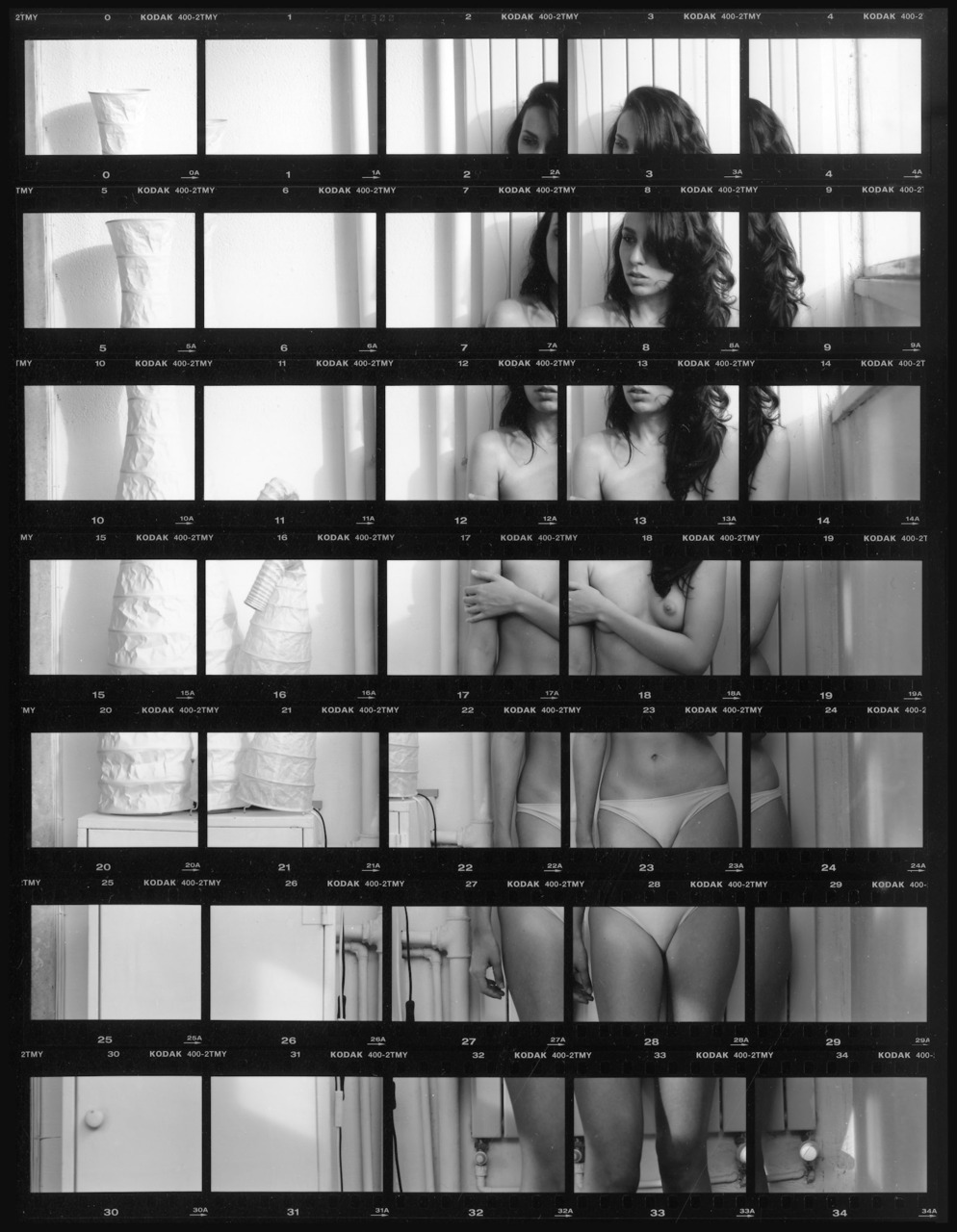 When I see this I think immediately of Ed Ruscha’s Every Building on the Sunset Strip. (Also, his use of contact sheets.)

There’s also something maybe vaguely Cubist about it, too.

Regarding the work, Mr. Zanaria offers the following statement:

The Pianosequenza (“long take”) project came about through a reflection upon a tool that is closely associated with analog photography, something that has been almost totally forgotten, despite its crucial role in defining the history of photography as we know it.

Usually, contact sheets are used as a working tool. They are utensils needed to make an initial selection from the images captured on film, destined to be forgotten once they have fulfilled this transitory function. Although, when viewed as a whole, they narrate much broader and more complex stories than those visible in the few images chosen, these tales are known only to the photographer and to the few people involved in viewing the “contacts”.

In this sense, it could be said that they have a dual identity: they are fundamental for the photographer in choosing which images will come to life through being printed and made public. However, for those who later view those photographs, which have been selected precisely thanks to the contacts, they remain a complete mystery, or at best, an amusing curiosity.

In Pianosequenza, the roles are inverted: the individual photographs lose their original function as stand alone images, and become the building blocks of a greater whole, making them barely significant (if not indeed pointless) without each other. At the same time, the contact sheet goes from being mere container of frames to be selected, to being the central character, the essential element required for the final image to be revealed.

The end of this project is symbolically represented by portraits of some of the Masters of photography, who have grappled with this tool in the course of their careers. Here, the technique used not only refers to the sitters own work, but also highlights the complexity and wealth found in the setting of the portrait. The individual shots thus become clues, traces of a world that can only be reconstructed by viewing the contact sheet in it’s entirety.

Lastly, the title, which was inspired by the cinematographic technique of filming a scene without interruptions, editing it directly from a camera during a take. As in the cinema, here too the image is edited at the moment in which it is captured, with the frames shot according to a sequence based on the way in which the film will be cut during printing. The final image will only be successful if each single element is functional to the overall view, thus creating a sort of “Pianosequenza”.

Pianosequenza translates as: ‘sequence plan.’ Due to the pre-planning and necessarily painstaking execution, the title isn’t incorrect in any denotative sense.

Allowing Zanaria leeway and as far as pianosequenza go, I can’t exactly argue with the assertion that a single frame will be rendered meaningless when divorced from sequential context.

But strictly speaking it’s the replacement of one single, flickering still image with another–the illusion of seamless fluid motion that distinguishes cinema from photography.

In this work, the viewer sees everything at once. Zanaria argues that the presentation de-emphasizes the individual frames in favor of the larger context of the contact sheet whole. I can’t accept that because individual images are not as insignificant–to my eye–as insisted upon by their creator. If nothing else the overarching plan lends an artfulness to them, suggests a seeing of the foreign in the familiar.

One must also bear in mind the conceptual disconnect: pianosequenza are predicated upon a lack of interruption/absence of montage. The work is fundamentally built on montage–smaller pieces strung together to create a broader whole. Further a true pianosequenza would dictate an uncut strip of cinema film; while, the 35mm contact sheet involves at least five cuts.

Ignoring the statement, I am pretty into this work. The trouble is the statement is so overwrought, logically flawed and at a remove from how the work reads that I have to admit I am rather put off by it in the final analysis.