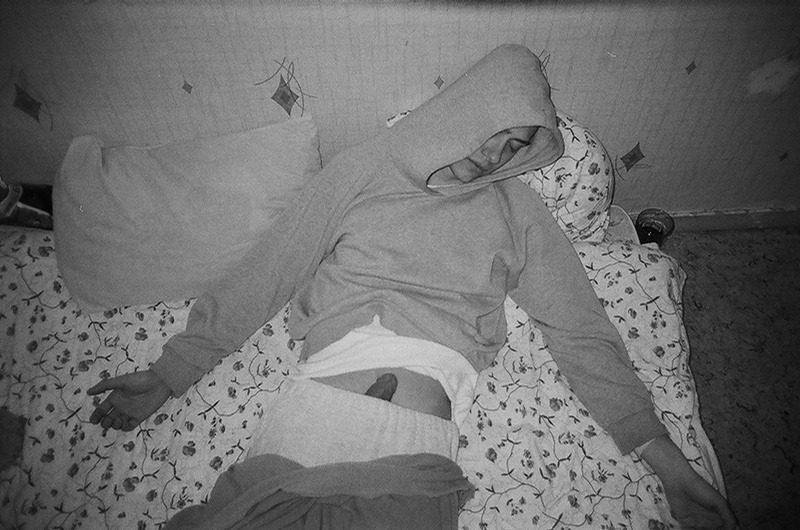 By her own admission, Demianova is preoccupied with establishing a female gaze countering Berger vis-a-vis Benjamin’s art historical male gaze.

I won’t argue that her assertion is unfounded–the work does supports it. I just think that perhaps the notion might be more effective applied in analysis of Rita Lino’s work. Further, when she’s asked about the female gaze she trots out flippant non-answers a la I am a female so is my gaze.

In fairness, that half-assed quip comes from a painfully bad interview with DAZED in which they compare Demianova’s images to Petra Collins’. (As an aside: it seems if you want to talk about Collins you’d really be better suited using Arvida Byström or laurencephilomene-photo.)

Demianova’s work–preoccupation with the female gaze, notwithstanding–has far more in common with Igor Mukhin (a fellow Russian who also shoots both B&W and color) or, in an inversion of style, Noah Kalina (who is similarly caught up in fashion/editorial work and who favors skin tone just beyond the edge of overexposure, an equal but opposite effect to the way Demianova often lets her backgrounds edge dark and muddled to render a somewhat sinister Floria Sigismondi/Kubuki effect.)

But I’m not really especially critical of Demianova’s work. It doesn’t all appeal to me but like so many other artists of Russian and/or Eastern European extraction, there is an edge that draws me like a moth to a flame.

I think it has something to do with–and I may be off base her because I know little about Catholicism and even less about Eastern Orthodoxy–but there seems to be a different perspective on physicality. In the West, the body must by brought under rigid control, but I always feel very much as if in Russian and Eastern European work (at least modern work) there is a way in which physical sensuality is a spiritual realm.

So that is the bias which makes me without hesitation think the boy above is posed to recall the Blessed Virgin. The genderfucking undertone is satisfying. But what sells the photo–and (at least in my mind) suggests that even if Demianova hasn’t quite learned how to express it in interviews, she is not being even slightly pretentious when she mentions her aesthetic of a female gaze–is the fact that the way it’s shot with the photographer ostensibly standing over the subject and using a strobe, this feels like it’s also trying to re-appropriate an aesthetic now very nearly ruined by its association with predatory scum bags like Terry Richardson.