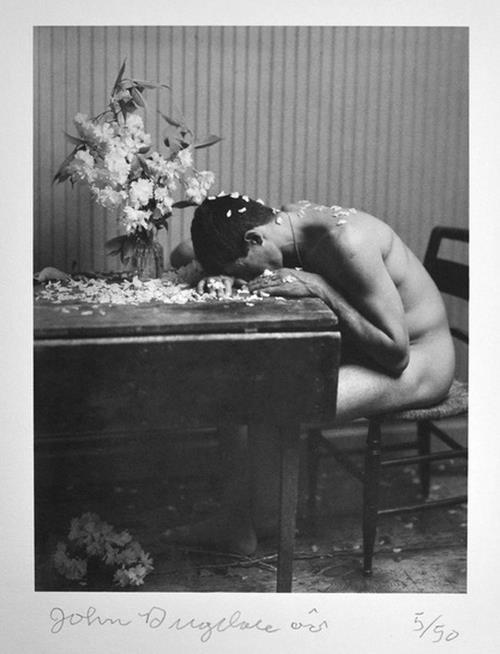 I’m forever suspicious of artists who lead with a list of influences. It always feels a bit like an effort to force your work to rub shoulders with the work that initially drove you from passive consumer to active creator. And it frequently comes off as an attempt to predispose the audience to approaching the work in a proscribed fashion.

I’ve learned to be especially dubious of people who lead with exceedingly obvious options. Like I’m not going to talk about the influence of Francesca Woodman or Andrei Tarkovsky on my own work because the debt is so extensive and front-and-center that to draw further attention to it would be rudely redundant.

Dugdale’s portfolio is there double quick with the suggestion of a genealogy shared with Henry Fox Talbot, John Herschel, and Julia Margaret Cameron. Excluding Talbot, they aren’t the usual suspects.

He goes on to mention the American Transcendentalists: Whitman, Dickinson, Thoreau, and Emerson.

I’m always intrigued by the cross-pollination of disciplines in the arts. So a photographer who cites writers as influences, has my attention. (In my own work, although I won’t get into Woodman or Tarkovsky, I will absolutely drone one endlessly about the global impact on my own creativity as a result of the music of Godspeed You! Black Emperor.)

For the benefit of those of you who aren’t necessarily well-versed in the art historical equivalent of card counting, Dugdale is soft shoeing it around a rather obvious exclusion: William Blake.

But wait, you interject, wasn’t Blake all about Red Dragons and The Ancient of Days?

Indeed he was. But, bear in mind that Blake was subversive as fuck. He was re-introducing the fantastic to the familiar–the familiar being prudery surrounding the practice of Xtianity. Or, if you’d prefer: Blake wanted to reappropriate wonder from centuries of lifeless liturgical boredom.

Dugdale’s work seems comparably preoccupied with searching for the transcendent in the mundane.

And now I’ve earned the right to inform you that Dugdale is completely blind and has been for the majority of his photographic career.