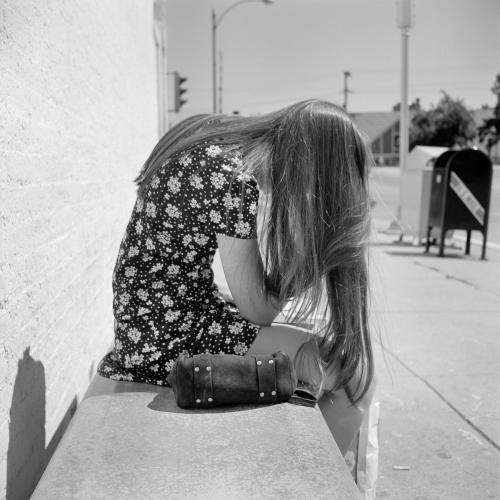 Finding Vivian Maier isn’t just enthralling, it’s an exceptionally well-orchestrated documentary that is crucial viewing for anyone who is passionate about photography. (If you haven’t seen it already, please do.)

After watching it I was left with a number of questions: was Maier perhaps on the autism spectrum? To what extent is her work improved by Maloof’s posthumous curation? How did this woman who was–by all accounts absolutely awful at dealing with other people–produces such luminous and humane images?

But this image makes me drop those questions in favor of an imaginative flight of fancy:

A year before this image of was made, William Eggleston captured an image of a very similar looking young woman. Recently, Bryan Schumaat produced an image clearly intended to mirror Eggleston’s but that draws Maier’s image into more intimate dialogue with the other two.

It’s clearly not the same person–just a reflection of similar trends in fashion, similar predilections in image makers. (Although the same woman never aging and being photographed throughout the ages would make a wonderful premise for a sci-fi/fantasy story, no?)

I recently received a comment from an anon claiming that I was entirely too ‘self-satisfied’ considering the effect of prevailing intellectual trends in forming my notions. Generally, I do my damnedest not to feed trolls. And in spite of the fact that the fair response would’ve been have you bothered to read anything I’ve written? I’m pretty upfront about the deleterious effect of academnification on my brain. I call myself on it regularly.

I think less the question and more the statement these images make–whether they meant to or not–about the objective limits of originality in creative expression. Meaning and understanding function as a result of convention, after all.