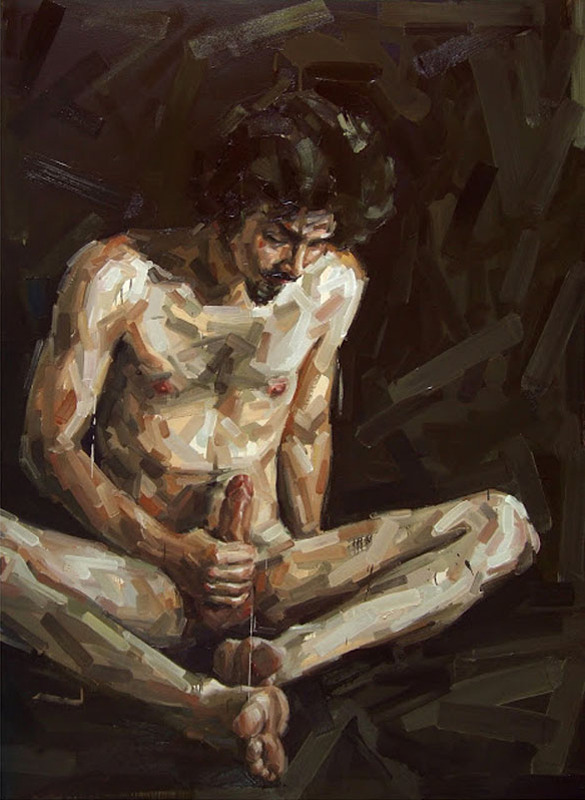 I’ve featured a Baroli painting once before even if I didn’t know to whom to attribute the work at the time. (It remains one of my favorite images I’ve ever posted.)

Even though most of the attention he receives is due largely in part to the erotic/transgressive work, he has produced a broad spectrum of work.

These images (here, here, here and here) pull together a sort of comic book style confrontation with Chuck Close pastiche.

In other works, there’s the unmistakable flavor of Degas.

The unifying thread with these various approaches is likely a simultaneous attraction to and revulsion from the simple, direct compositional dynamics of murals. For example, although Diego Rivera tends to pack as much detail in his frames as possible, if you focus on the way Rivera presents individuals distinctly within the visual milieu, you’ll recognize their echo in Baroli’s rendering of his subjects.

The use of layering and color is masterful. You can tell that the application is not just suggestive of an understanding of color theory, it’s a short of showing the seams of how painters achieve such sublime colors; however, the more bandage-esque suggestive of tonal accuracy fades when Baroli reaches the genitals of his figures. (Or, at least as far as penises go. His depictions of vulvas are really abstract.)

It’s clear that he is interested in the notion of the relationship between physicality and visual representation as well as sexual and individual identity. He’s obvious invested in fucking with those boundaries.

Also, there seems to be a certain perhaps reflexivity between his conception of genitalia and sexuality that could further perpetuate the sexualization of bodies. I’d wager he’s aware of this; and I see his preference for depicting erections as a likely effort to preempt such criticism. However, I’m not 100% convinced it succeeds.

Sujeito da Transgressão #4, it feels as if it’s predicated on an implicit gender bias that doesn’t necessarily turn me off of the image but renders me uncomfortable because the work still very much turns me on–if that makes a lick of sense to anyone other than the voices in my head.