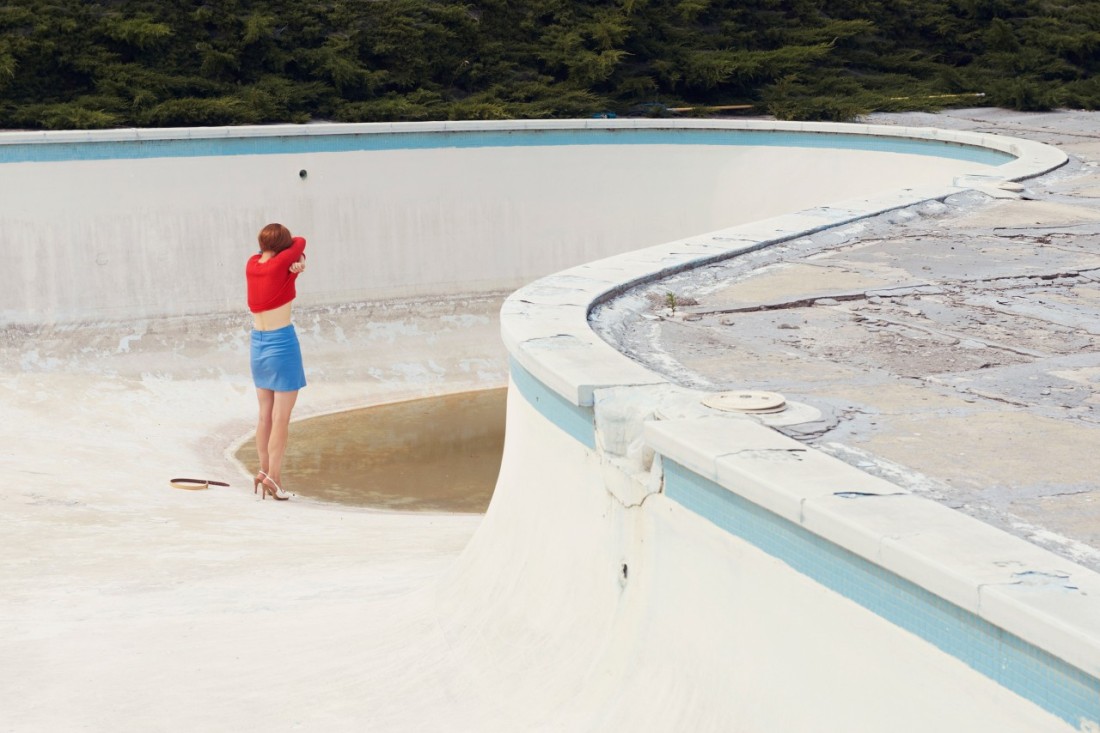 There’s a way in which a figure in a landscape skews towards being indicative of an underlying narrative.

I could digress into speculation on the relationships with staffage, segueing into an analysis of staffage’s inherent narrative potential by contrasting an idiot like Gregory Crewdson who won’t shut up about narrative but whose work is fundamentally un-narrative and a masterful painting like Bruegel’s Landscape with the Fall of Icarus. (It’s worth noting that Roy’s image does suggest broad answers to the questions why is this character here–she clearly intends to go for a swim and is undressing to facilitate that. Before the moment we see now she was ostensibly not in the pool and we can presume based upon what we’re seeing that she will soon wade into the brackish water. Is her motivation being in a sort of dream-like state where she will sink into the puddle and be transported to another layer of a dream? Or are her actions driven be a sort of suicidal abandon–perhaps motivated by bourgeois ennui? Unlike Crewdson, Roy gives her audience nuanced implication from which to draw conclusion and does not rely on empty spectacle to miraculously catalyze the suggestion of the action leading up to this point and potential actions trailing away from it.)

Of course, there’s also comparisons which can be made with Stephen Shore’s American Surfaces–Hope seems almost self-consciously aware of it’s reverent emulation of the former.

But I think it’s all a little too easy to head down these rabbit trails. It’s not that I don’t think the work supports them–it very much does. And it’s not that while I am extremely fond of the above image, the rest of Roy’s work is a bit too late-70′s/early-80s high end fashion editorial kitsch in it’s frequently garish execution.

There’s an argument to be made that perhaps a more productive approach might be to examine the influence on her work of cineamatic auteurs. There’s a clear strain of Lynch–likely more directly localized in an idealization of Hitchcock. (It’s difficult to look at her supersaturated pastels and not think of Kim Novak’s wardrobe in Vertigo.

However, when you browse through Roy’s oeuvre–as I did this morning while sipping Chameleon Cold Brew Coffee–there’s a sense that you really miss the central thrust of her work examining her work as if it’s born solely from the influence of photographic progenitors. I dare you to try to look at her Carte blanche pmu/le bal series without flashing back to Jacques Tati–in particular: Playtime.