Everything old is new again.

I’ve been thinking a lot about the letter of the law vs the spirit in which it was given.

For example: this is clearly a v. clever end run around The ‘Gram’s policy regarding what is acceptable to post in terms of nudity or sexually explicit imagery.

There’s the school of thought that artists who address issues relating to bodies or sexuality, should know the rules governing acceptable content inside and out–whether to steer clear of them entirely or use them as cover for challenging their existence.

It’s less the fault of this dichotomy than the rules themselves but it needs to be made more apparent that that such rules really do encourage the conflation of naked bodies and sexuality under the rubric that both are pornographic. (Which is rhetorically a means of extract the age old argument of where pornography–distasteful, but protected on the grounds of free speech vs obscenity and then reapplying the same animated principle to questions of what an image can or can’t show before being relegated to the same category as pornography.)

Now: one of my most prevailing personal preoccupations is the intersections of art and pornography. And I think images like the above manage to interrogate interesting notions. For example, the photographer her is a woman. So while I am generally one of those blogs that really doesn’t especially care for images where the image maker presents themselves as touching the model. (Grammatically, this isn’t so strong suggested here due to the hand entering from frame left as opposed to the lower frame–which relates instinctively with the notion of the fourth wall.)

But it’s also interesting that this is a woman who is choosing to present this vantage. (In combination with the title, there’s a lot to unpack–and I encourage you to spend some time with those thoughts, but I have a different agenda…)

In a way, I think this is actually more sexually suggestive by implication than something that embraces obscenity as a means of decrying the rules of what is and what is not acceptable. Or, the better way to put it might be to say: knowing the rules well enough to break them is an act of transgression–an act of transgression which bestows on the work a transgressive punctum. Whereas work that embraces a level of obscenity never considers the rules as such as an sort of genesis point and instead makes the work in an image of unmediated vision.

I think both can have credible art-ness but I think it likely unnecessarily complicates things in more cases than not. 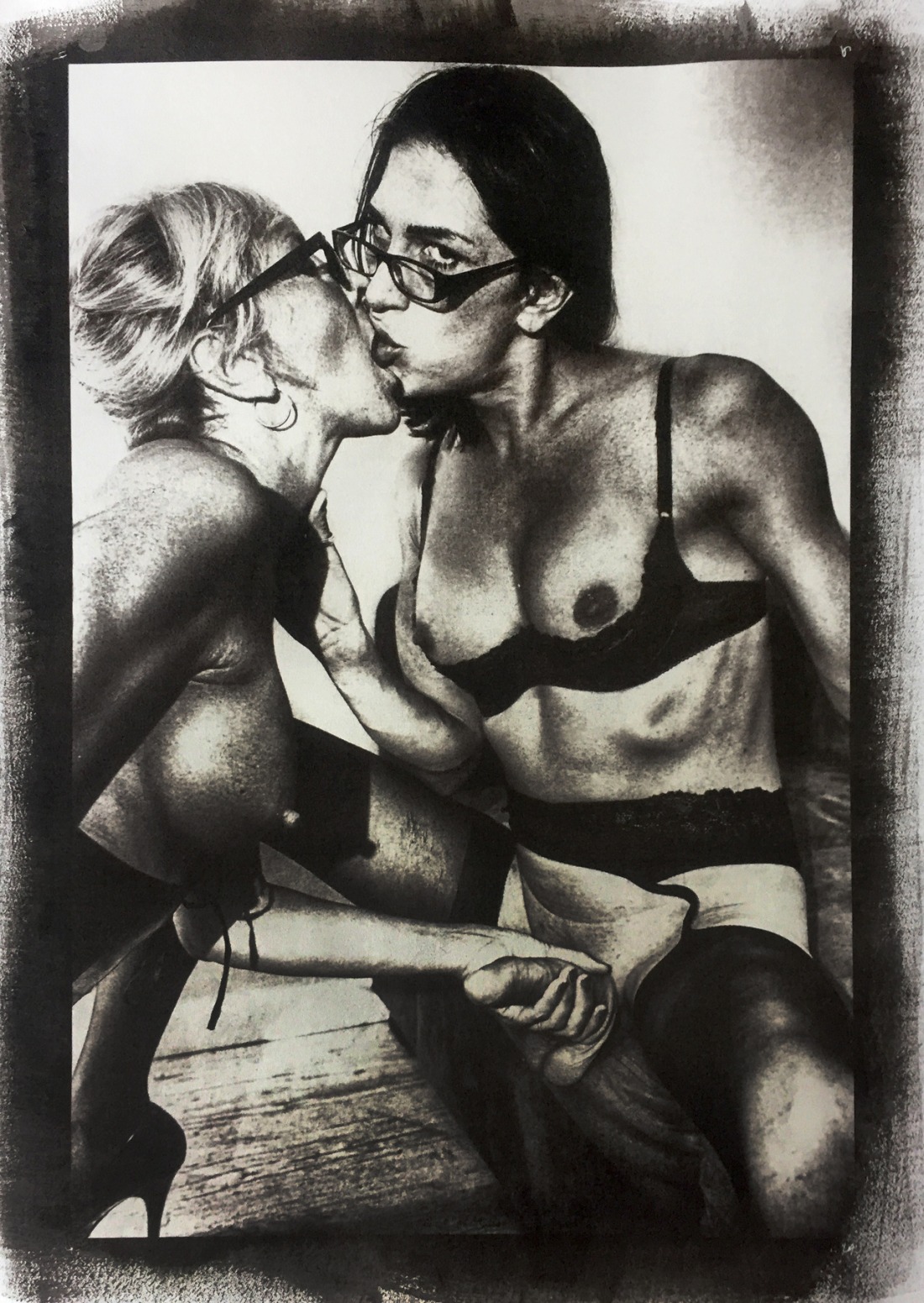 It’s interesting to me what people accept regarding the aestheticization inherent in most mainstream pornography. That the cute college coed is going to answer the door in her robe, see the muscly stud with a pizza and be immediate DTF? That everyone who fucks does so in opulent but ultimately either nearly empty or decorated without any discernible sense of form or function, without a single trace of any sort of shadow anywhere in the scene? That the only people who fuck are perfectly depilated without a trace of body fat?

The general motif is that if it distracts from the fantasy, it should be diminished or eliminated. But just as the best lies are sown in the same furrow as truth, so I think that the reality of depicting sexuality is that if your fantasy has an correlation with reality, an aesthetic that eschews the aesthetics of perfection is probably the better option.

This image is downright ugly–looking more like a photocopy of a photocopy that has been darkened to compensate for the first layer of generation loss. But it really does work better for that. You can’t so much focus on the pretty picture so you instead have to embrace what’s being depicted to engage with the picture.

And I can’t tell which part of this I like better: the self-aware way the model is staring directly into the camera or the discrepancy between the way her ankle in those stiletto heels is wrapped in light or the way you can only see the other woman’s breast by imagining what’s in between her breast and the cast shadow.

@aprivateexpose’s stated intent is to: “dance around that fine line between art and pornography”.

I feel like the above set does some things well and other things less well.

Let’s start with the bad and move toward the good.

However, in the 3rd picture is presented as part of a series of 4 images. And that connection does at least establish context, i.e. a group sex scenario. (And I love how the person standing to the side is presented as ostensibly focused on taking a hit on the bowl she’s holding and then the way the second frame hides the dude’s face with his hair so that the punctum of the frame becomes the Cheshire grins of the two ladies.

The final frame is less male gaze-y (remember the viewer always subconsciously associates the bottom of the frame with the fourth wall, so this to me is less creepy than the 3rd image.

I don’t think any of the images work independently of each other. Presenting them in this way makes them work as a whole–however, since what works with each frame doesn’t ever really fully integrate with the tableau, I am left with the sense that although this is a good bit more contemplative w/r/t the firewalling of pornography as a subject for art than most work on Tumblr, it separates the totality of impact across four frames and in so doing dilutes the artistic impetus in favor of the more erogenously charged documentary fixation. (In other words, the good things I mentioned about the work could conceivably all be staged so that they all might comfortably coexist within a single, static frame.

I love everything about this–and Darling’s images are 120% worth digging into–however, I’m less interested in talking about the tenebrism in this or the compositional acumen (reading from left to right, you see the backbending body first and then the framing negative space balances the positive space in a way that insists upon the viewer considering both what is visible and what is occluded within the context of the frame in its entirety).

Instead what I’m interested in is the inverted cross tattoo.

First off, it’s a fraught symbol. There’s all the goth scene appropriations and witchy applications and it’s become an over-the-top cliché in black metal–and unfortuantely, through black metal the image has been appropriated by some less than savory ideologies.

The reason the symbol appears to me is that way back in the day when I was dabbling in staunch atheism (a viewpoint I have only slightly more sympathy for these days than Evangelicalism) is because, I don’t think anyone who identified as an atheist in the late 90s and was really into the fringes of the metal and progressive rock scenes, didn’t go through a phase of confrontationally pointing out to Xtians that were it not for sheer luck they’d be Mithrians (after the Mithras fertility cult).

All I really knew about the cult was that many of their rituals bore more than a passing similarity to Xtian observances. I remember being told by several of my acquaintances who were self-proclaimed occultists that the symbol of the inverted cross was originally associated with the Mithras cult.

Further, the Roman crucifix was an inversion and perversion of the Mithrian symbology framing the ‘rightside up’ iteration as a symbol of death by linking it with the prominent mode of capital punishment.

Subsequently, the Roman Catholic Church appropriated the symbol as a means of claiming dominion over the realm of death through Christ’s death and resurrection.

However, most sources cite the origination of the inverted cross as the Crucifixtion of St. Peter–who insisted on being crucified upside so that no one would associate his death with Christ’s. (Given my understanding of the image, I find this complication utterly fascinating.)

I was less than critical with a lot of stuff I was consuming in my early 20s. So I went back to check the validity of this and although I can’t find any definitive proof I did discover the apparently initiates to the Mithras cult went through an induction ceremony that unfolded a-whole-fucking lot like a baptism and ended with the inductee having a cross scarified onto their forehead.

If you consider this in the context of the fact that Rome was already a full-blown empire before the Mithras cult came up and it appears that crucifixion would’ve risen to predominance around the same time as the cult. And given the disparity between a fertility cult and the death cult of state sanctioned executions, I don’t think my understanding is entirely implausible here.

Either way: I am increasingly preoccupied with the panoply of often contradictory significations folks impose on simulacra. To me: such signs are more resistent to the ascription of extant meaning and instead require both constant personal re-evaluation as well as contextual exegesis. In other words: it’s difficult to make an idol of that which will always and forever remain ambiguous.

It has been shown that at least part of the information received by the optic nerves is routed through and affected by memory before it reaches the part of the brain that deals with visual impulses (input). Now René Dubos discussed the distortion of stimuli: we tend to symbolize stimuli and then react to the symbol rather than directly to the stimuli. Assume this to be true of the other senses as well.