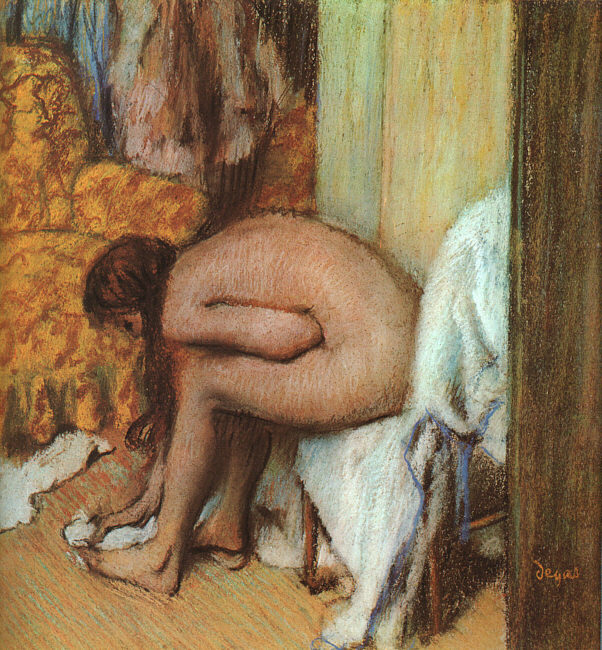 Edgar Degas After the Bath Woman Drying her Feet 1886

Georges Bataille’s Story of the Eye is widely acclaimed novel featuring jaw-droppingly pornographic interludes. I read it in one evening six years ago during which time it proved necessary to bring myself to orgasm not once, not twice but thrice.

I think there is a similar desire to show something taboo but the way Degas goes about it is just a little too sublime to at first glance see how devilishly clever he’s being. Yeah, the thought of a woman in the bath makes you think you might go all tingly down there if you focus on it too much. However: instead of sensationalizing the prospect he treats it as the mundane domestic scene it is.

The first thing I notice—and full disclosure I am as far from an expert on Parisian social mores in mid-to-late 1880’s as one person can get without expending effort—it would be unlikely for such a young woman to live alone. Why do I say she lives alone? Look closely—where is she drying her feet? Yes, she’s sitting in a chair covered with what seems to be a robe but since when are bathrooms big enough for armchairs and closets? There’s no indication of a tub and this looks like a bedroom or sitting room. It follows that she has finished her bath and moved out of the bathroom to sit in the chair and finish drying off. It could be husband isn’t home or she is a working girl but either way she is demonstrating behavior only becoming of a damp trollop.

Damp trollop or not, with the feminine touch of the robe laid over the back of the chair the space—although not probably her apartment in real life, becomes hers. If we stop to question whose things these are, the only conceivable answer is hers. However it happened, she has a space of her own. She has things and she does things just as we do. In other words, we are looking at woman who is, like us, deeply human.

The ‘we’ to which I keep referring is a reference to the fact that his work is without question voyeuristic. She is unaware of being watched by someone unseen to her.

There are three more things I have to mention about this image:

First, Degas began experimenting with photograph in the early 1880’s. It is impossible to not see the effects of that experimentation here: how the extreme foreground and background become increasingly blurred as you move away from the woman’s back—the point of focus; causing the scene to appear as if through a lens with a wide aperture/shallow depth of field.

Second, models always talk about never knowing what to do with their hands. Look at this I am reminded of something that I was told repeatedly in film school but I did not until now grasp the meaning: always motivate an action. In this case, the exaggerated act of drying her feet occupies her hands in a way that is already relaxed and natural. (The way her left arm is tucked between her leg and chest is my favorite thing.) I suspect when I model mentions she does not know what to do with her hands, the real fix is not to imagine things for her to do but ask instead: what is she to be doing in the scene.

Finally, this work stands out from the rest of Degas’s oeuvre; so much so that although I find Impressionism highly distasteful, this is one of my favorite paintings ever.