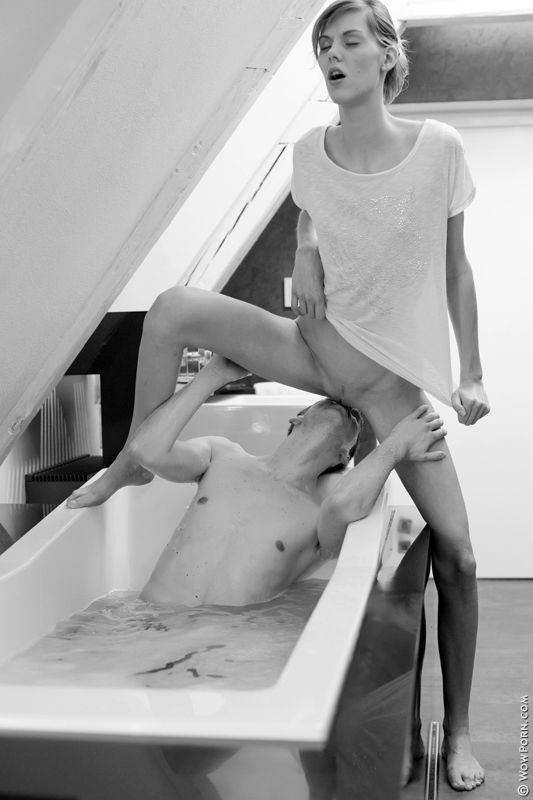 Still from A Surprise Guest featuring

Straight-up (pun maybe intended), this is some Grade A #skinnyframebullshit.

I am going to overlook the original image being both in color and bordering on overexposed– I fail to understand how shooting to the right is preferable to just exposing correctly in the first fucking place. But, why did some idiot feel compelled to de-saturate? Was the goal to produce a flat, low contrast image? If so: bravo– mission accomplished.

Technical concerns aside, the image’s awkwardness also works in its favor. It is, after all, an image belonging to a larger more-or-less sequential, implicitly narrative images. For example: before I researched this image, I was fairly sure that this young woman walked in on the young man in the tub, things escalated and she began to undress. (As far as I can tell, that is in fact, what happens.)

There is also the ripe implication of what will happen next: the scenario will proceed to intercourse. Thus, this single image contains all the information for the viewer to discern the entire narrative arc without seeing any other image.

The possibility of distilling a story to a single narrative image seed is an idea with which I am pathologically obsessed. And for all its faults, I actually prefer this to the arbitrary, narrative pretense of photographers like Gregory Crewdson, Sébastien Tixier and Reverend Bobby Anger. (If you disagree with this premise: attempt to envision what happened immediately prior and what will happen next. (Pro-tip: you can’t; despite all the gum flapping about narrative, when the work has more in common with the so-called ‘tone poem capturing the something of the weight in moments heavy with emotion.)

But, I would have posted this for nothing more than the way Cindy is standing over the boy in the tub, her expression which might actually be an unfeigned premonition of pleasure. Plus, I think it is so, so hot that she still has her top on.