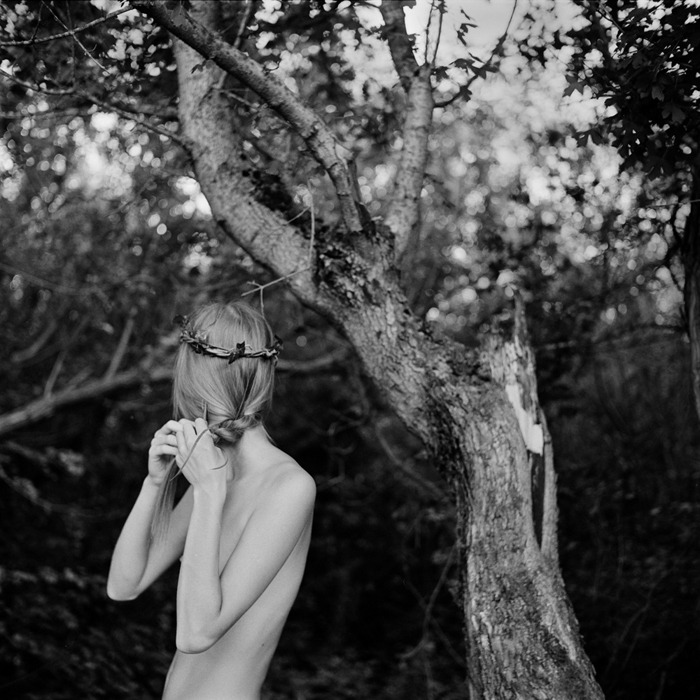 There are so many things this does well–the tree trunk twists up and stretches away  into the background, the young woman leans every so slightly toward the camera to counterbalance this retreat (it’s rare to see such shallow depth of field used to interesting, thoughtful effect); not to mention the effing lovely cinematic bokeh…

I don’t have any quarrel with this photograph in and of itself. In fact, I’m rather fond of it. The thing that baffles me is the rest of Kozhanova’s Prussian Brides series. I don’t understand the use of eye contact with the camera, POV shots, not to mention her homage to Jock Sturges and startling similar ways her shooting windows is reminiscent of Michelle Arcila.

The statement of purpose accompanying this body of work–contributed by Russian curator Irina Cmyreva– (unfortunately) further muddies the matter. After localizing the work in the history and tradition of Prussia (now Kaliningrad), she connects to work with the ‘original Prussian legend’ where:

[A] dead bride in ancient times whose tomb was opened and it was discovered that she had disappeared. The Prussian Bride is a kind of
film or literary narrative about a girl’s dream of an old house within
an ancient estate in the forests. The month of May is the time when
nature awakes again and is reborn. It is the time of the ancient legends
and the folk celebrations of the “May Bride”. In her re-telling of the
legend of the May Bride, Kozhanova incorporates Prussian culture in the
blond beauty of the girls, the old style of the dresses they wear and
the architecture of the house itself.

It speaks to how much better the above photograph is than the rest of the project that verbal diarrhea such as this actually serves the work. But it detracts a great deal from the rest of the images in the series.

The images are not a stand-in for ‘a kind of film’ or a literary narrative. They might be a bit of a dream–that would alleviate some of my more pressing concerns. However, in point of fact, it’s not. The work is precocious portraiture, edgy editorial or oneiric look book. By trying to be all those things at once, it ends up being none of them.

Kozhanova is still a teenager–a clearly clever and talented teenage. So I’m willing to give her some credit. There’s a chance a 6×6 camera is all she has and another chance that it was less her notion to tie her work together with a pat mythological reference. And even if she was directly responsible for both decisions, her work is sharper than a great bit of what’s out there.