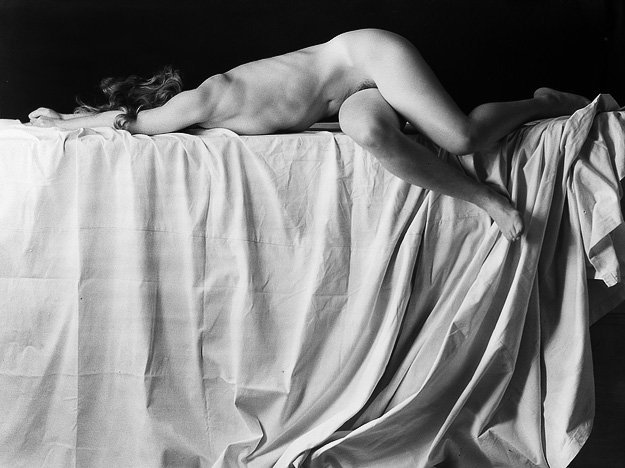 There’s not a great deal of information on Sougez floating about in the digital aether.

From what I’ve gleaned he was part of the New Objectivity which was among other things a rejection of Expressionism.

Sachlichkeit should be understood by its root, Sach, meaning “thing”, “fact”, “subject”, or “object.” Sachlich could be best understood as “factual”, “matter-of-fact”, “impartial”, “practical”, or “precise”; Sachlichkeit is the noun form of the adjective/adverb and usually implies “matter-of-factness”

I’m not about to say such a definition is useless; however to me it is practically useless–I have no idea what purpose it serves much less how I am intended to apply the information henceforth.

The question this image begs–at least for me–is: what constitutes the primary focus of the image: the woman or the draped fabric?

As to an anwer: I’m inclined to say both; therefore neither.

Well, a clever interlocutor might inquire: how is it both and neither?

Here I can do little more than point. But I suspect the question of whether it’s the woman or the drape is functionally identical to the reason Uta Barth isn’t a minimalist.

It’s something to do with the interpenetration of human perception of space and human intervention in space that is perceived–in this case the area over which the camera hoveringly waits.