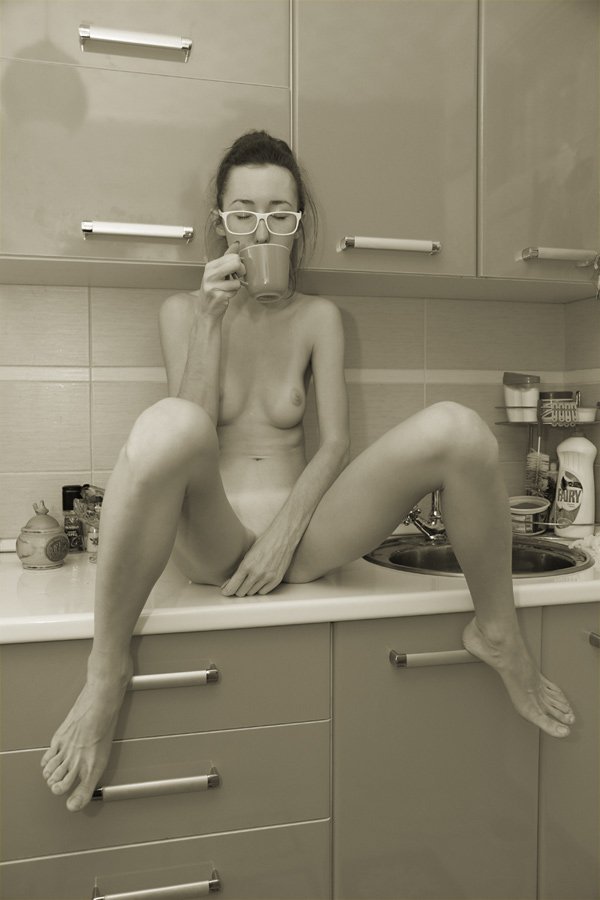 For the record: this ISN’T #skinnyframebullshit.

Which is not to say I entirely understand or agree with the orientation, but there is a persistent logic to it–the verticals are level with the left and right frame edge and the way the horizontal seams stand in relationship to the horizontals recalls Piet Mondrian.

To understand, why the vertical composition isn’t as problematic here, it’s necessary to examine the complications presented by a horizontal frame. There’s only two ways it can go: either you increase the amount of the kitchen around the subject or you place the camera closer to her.

Both these options diminish compelling facets of the original. In the first case, a wider shot of the kitchen increases negative space while decreasing immediacy/intimacy; in the second, you’d lose a good bit of the way the upper cabinet’s glossy finish blurrily reflects the rest of the room the viewer cannot at present see–suggesting a holistic and somewhat immersive totality of space.

Thus, whether I completely agree with the orientation or not, there is a clear, legible logic guiding it.

Yet, that’s not even what I like most about this image. What gets me is the way that it manages to stipulate it’s own context. Namely, if you’ve spent any time on Tumblr you know that disgusting creeps who bully, belittle or attempt to shame folks who post nudes–as if naked bodies are always inherently sexual.

I 120% support people who want to post nudes and not get shit for it. At the same time, I do often wonder to what extent failure to address such work from the vantage of its position in a particular traditions, be that nudes or fine art nudes… I do feel that there is a pervasive thread of believing that the master’s tools will eventually dismantle the master’s house.

In other words, we all just need to do better. To insist our work isn’t about sex or sexuality when it includes nudity and that’s it. Unfortunately, that ignores a shit tonne of subtlety and nuance. It can be both or neither or something else entirely.

What I like about this is it feels like a self-portrait. A sort of this is who I am when I’m authentically me–I get up in the morning and sit my bare ass on the counter while I drink my coffee.

The image conveys a real sense of comfort in one’s own skin. Simultaneously, there’s an awareness of the relationship between the subject and the camera. A sort of hey, this is how I roll and I want to document that but at the same time someone else isn’t necessarily going to see it the same way I do.

The way her eyes are closed and the way her left hand is positioned completely frustrated any sexualization of the image. And the brilliant thing about the work is it makes it seem incidental. There’s no sense that I’m covering myself because I’m ashamed, it’s more an: oh, this way I’m sitting which is super comfortable to me might be more than you want to see of me, so I’m going to address that in a way that doesn’t diminish how comfortable I am rn.

PS Super bonus points to you if you noticed the Fairy dish soap. It’s apparently a brand distributed in the UK, in case you care.