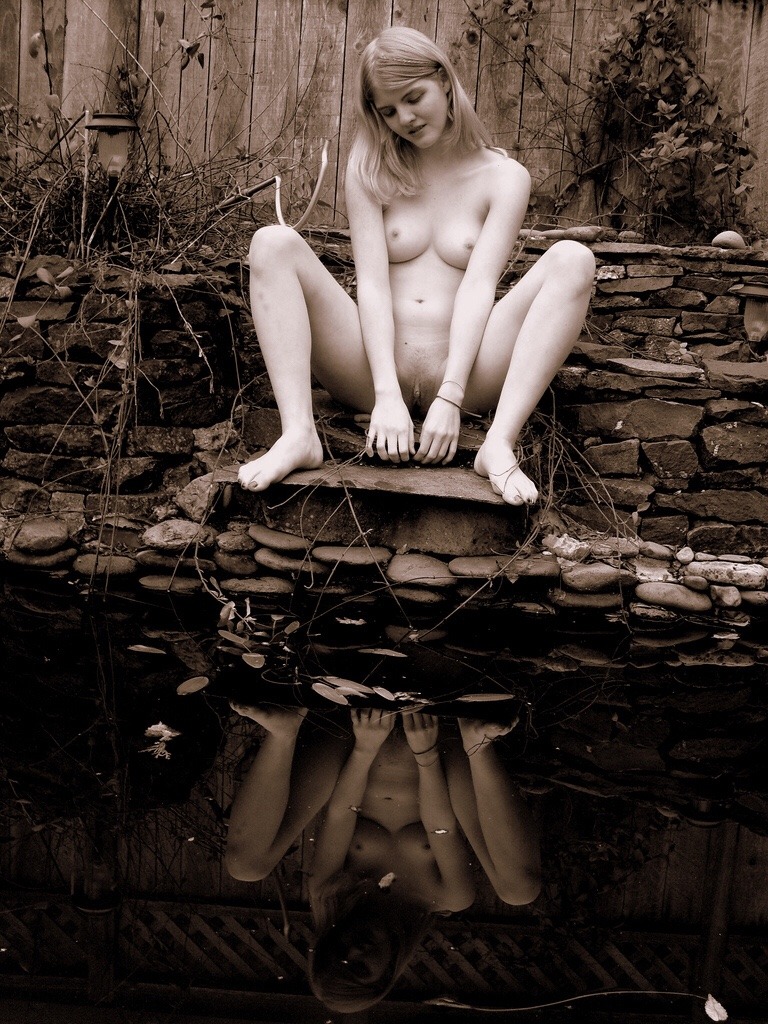 I can’t and won’t argue she’s a good image maker–though she does deserve credit for her brash audacity and seeming fearlessness in what she shows of herself.

The above image–presumably made by a friend–is from the stand point of technique–better than the majority of images in Tangolarina’s photostream.

Yes, it has a nice tonal range: it’s segmented between what you might call sepia-lite (in the skin tones), sepia-mid (in the area surrounding the subject) and sepia-heavy (in the reflection). The way it almost looks as if her reflection is staring back up at her is an inspired touch.

Unfortunately, the canted angle distracts from everything else. (What’s that? You say it’s a reference to the cinematic tradition of using an unleveled camera to convey a sense of nightmarish anxiety. Uh, no. I realize that the vast majority of photographers and image makers don’t have the budget of someone like say Annie Leibowitz. That means that we can’t always control everything about rendering the location an exact match to the initial vision. If the fence hadn’t been there, it’s arguably that this might have worked. (And it might’ve worked better given a vertical composition–the trade off being that the aspect of up-down flow would’ve been de-emphasized.)

My point is merely this reads like a back yard that someone is trying to use as an oneiric setting. The tilt isn’t severe enough to fully convey the aforementioned sense of expressionist foreboding and the fence actually blocks additional light that could’ve filled in allowing the reflected face to be fully visible.

As something between proof of concept and a preliminary storyboard, this is a stellar concept that I would like to see executed with greater attention to detail and working towards a clear conceptual end.

I really need to make one more crucial point here–and this is also sooo much more important than any of the preceding observations: I ADORE the way that Tangolarina is pushing the envelope on at what point depicting the body becomes pornographic. While some of her preoccupations and concerns are decidedly prurient, at no point does she allow things to drift across that nebulous line into the realm of pornography.

That alone is worth the time and energy necessary to explore her work.