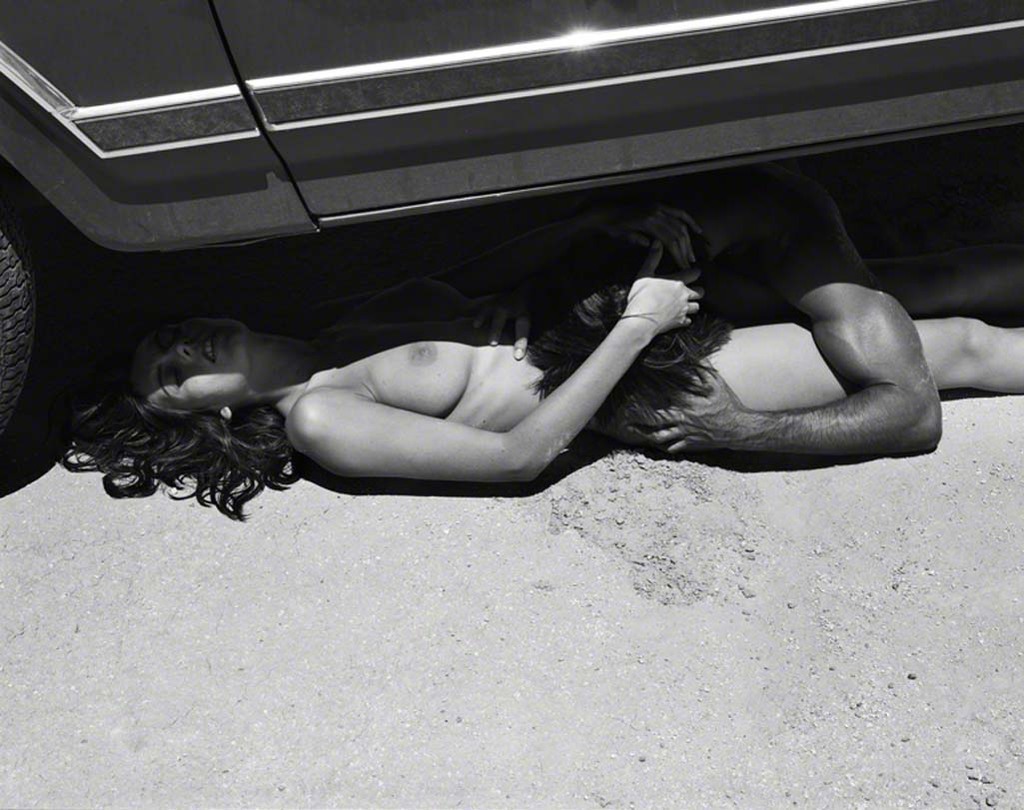 Here’s an image which triggers so many associations/causes memories to effervesce unbidden, causing me question my own objectivity in appraising its merits.

The frame is bifurcated: upper half vs lower half. Several interesting things are going on with this. First, the upper half does take up slightly more of the frame (like just eyeballing it I’d say that top is 55% and the sand in the lower half is about 45%).

The upper half has all the detail, contrast, dynamic range–all the positive space; whereas the lower half remains (except for the inspiredly disturbed sand between her right elbow and his left hand and the contrast added to the texture of the sand to create a slightly darker swath of sand radiating up and rightward from the lower right corner of the frame).

This has an odd way of perfectly balancing the composition.

Perfect symmetry is one of my interests as an image maker. But once you get right down to it, actually perfect symmetry is virtually impossible. Even the best lenses have some sort of distortion. Thus, my interest is always piqued when photographers find ways of invoking the spirit of the law of symmetry without being slavishly beholden to the letter of those law.

But I’m also fascinated with this image because of the way it simultaneously reveals and conceals–which is a stellar example of the conceptual underpinnings of the image echoing the physical form (composition). It literally both reveals and conceals the lovers–rendering the visible but also wedged in deep shadows. There’s the desert sand juxtaposed with the chrome and tires. Also, this is ostensibly a public space wherein something that is supposedly private is occurring, presumably surreptitiously.

It’s a narrative image–even if it is too vaguely defined for the viewer to penetrate further than the scenario. A man and a woman taking shelter from the sweltering mid-day sun to communicate their physical passion for one another. There are no indicators of who they are–although I’m inclined to say she’s aristocratic (pale skin); whereas, judging by the depth of his tan, he would almost certainly have to worked outside under the sun for years.

What resonates about this most with me is it invokes a memory of my last trip to Iceland. I’d spent the day in Skaftafell and was taking the bus back to Reykjavik. The bus stopped at Seljalandsfoss in the final half an hour of light– Everything washed in an thin orange patina. I remember being impressed with the vistas but feeling that there wasn’t really a incantatory photo waiting to be discovered.

Yet, as we boarded the bus and continued on our way and the light emptied from the landscape and the sky, we passed through the seemingly endless stretches of lava fields between Seljalandsfoss and Skogafoss. Beside the road, there was what looked like a small campfire.

As the bus sped closer, I just had time to make out two young woman huddled with their backs against the front bumper of their rental car they’d pull off onto the shoulder–more screen and mud than shoulder–of the Ring Road. They were both extending their hands, warming them in the glow put off by one of those camp stoves you peel back the top and set alight. Thus I see something here that reminds me of the intimacy of shared shelter in inhospitable environments.

On top of that, I believe that the car is probably a more blunt symbol. you can also read the photo as if the couple has been run over. In my own experience, when physical intimacy is good, it very much makes you feel as if you’ve been run over but have some how survived uninjured and, in fact, more alive than you ever imagined you could be.