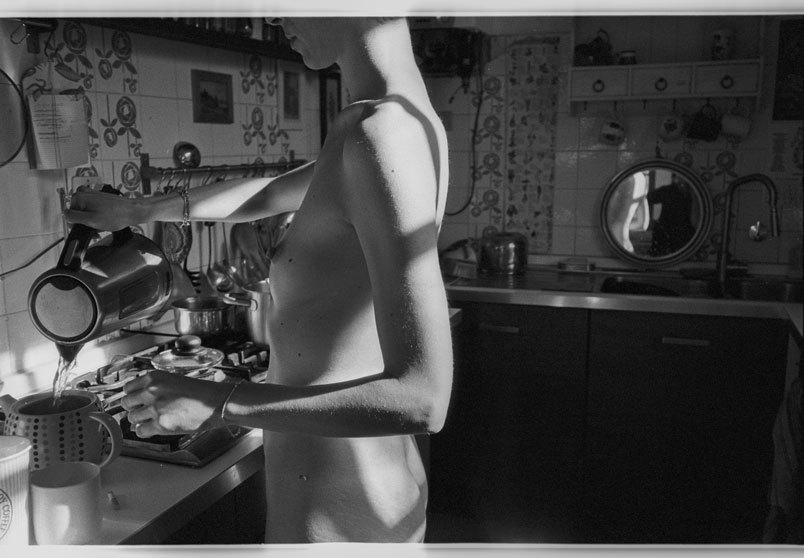 Everything about this photograph is effing exquisite.

If we’re evaluating it in terms of the Zone System, the majority of bright areas in the frame are either close to overexpsoure or legitimately blown out. In other words: zones IX and X.

This compression of both highlights and shadows, stretches the dynamic range of the mid-tones.

There aren’t really enough instances to really distinguish zones VII and VIII. I mean they’re there but the objective underexposure of the frame effectively renders fucking dynamic ass microtonal variations in zones III through VI.

The staging leans heavily towards frame left. The young woman’s back bifurcates the frame. Her pouring water into the teapot and the visible kitchen accoutrements pull the viewer’s gaze leftward.

As an photographer/image maker, you always want everything in your frame to work together to not only present a visually interesting moment cut from the fabric of space and time but to also present it in such a way that the viewer not only sees something but sees something in a particular way.

There’s a general rule regarding composition: that due to the tendency for the human eye to miss things that are center field, we tend to favor things slightly right or left of center. (Part of why the rule of thirds is so sacrosanct.)

A technique frequently employed to unify positive and negative space in the frame is (when you’re representing people) have their eye line look off into the negative space.

This breaks that rule but it does something else that is ingenious: due to where the young woman is standing the frame is divided into light and darker halves. This allows the viewer to see more of what she’s doing while also render the reflection of the light on her back in the what is it a silver serving platter leaning against the backsplash.

I would be very surprised if Vermeer’s The Milkmaid wasn’t some sort of inspiration for this shot. They make almost completely opposite technical decisions but the reasons for those decisions are governed by practical concessions to the limitations of the available space.

Also, I’m head over heels for the way the angle of the light accentuates the fine hair on her arms. Freaking gorgeous work.