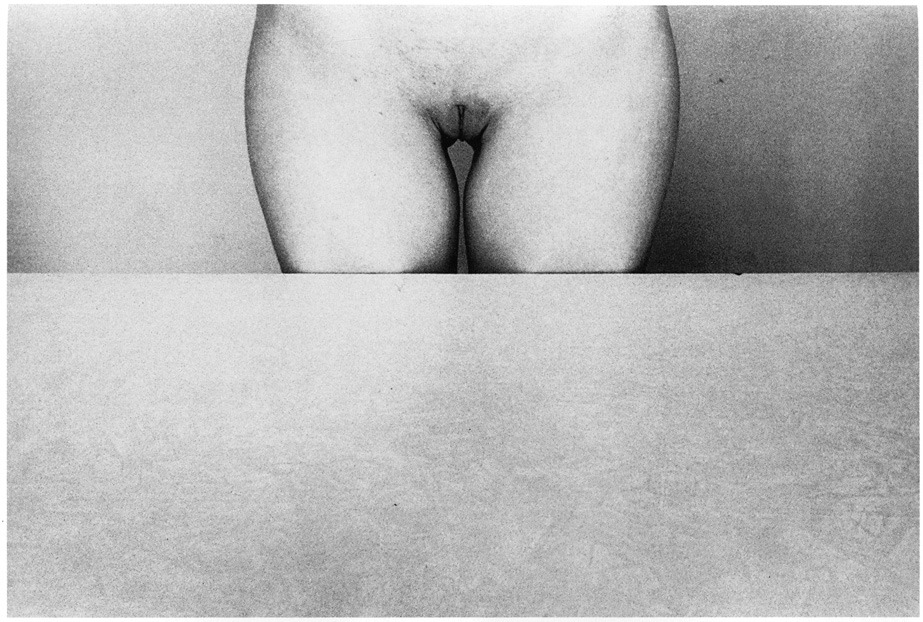 While the title is a riff on John Berger’s distinction between ‘naked’ (i.e. the natural state of the body) and ‘nude’ (i.e. the conventionally stylized art historical objectification of nakedness) in the seminal Ways of Seeing, I’m always suspicious when someone like Michals telegraphs that he’s aiming for the broadside of the barn.

Despite the simple elegance of the image, I feel like there’s an underlying middle finger being given to the notion that photography as an art is fundamentally more prone to essentialist objectification due the the inclusion/exclusion parameters of the frame edges.

Upon first seeing this I immediately flashed back to a college discussion on Piaget vs Vygotsky–specifically: the supposed necessity of object permanence in order for a child to learn language.

I never grasped the salient tenants of their disagreement but the general principle of object permanence applies here. At a certain point in our development–I believe Piaget would say it happened at one particular point, whereas Vygostsky insisted it was a recurring evolving process of increasingly sophisticated awareness–we learn that the toy our mom is hiding behind her back still exists even though we are unable to see it.

It seems Michals–who to my mind is a metaphysician first and a photographer second–is pointing out that we’ll allow that this woman’s legs continue below the table and even extend beyond the lower frame edge but politics insist we acknowledge that she is severed at the waist by the upper frame edge.

Using the table to create a frame-within-the-frame creates a tableau that it’s easy to dismiss as essentialist–reducing the female body to symbolic genitalia.

That this image doesn’t come off like that is a result of the clever composition, but I think contrary to Michals’ assertion–I’m pretty sure he’s a card carrying Cartesian–it’s the context of the image which dispels any trace of a sexist agenda. First, it is of an especially high quality, it’s self-consciously aware of the relationship between an out gay photographer, a nude model and an audience with the expectant male gaze default setting that will respond either salaciously, with disappointment or with critical censure.

The rightness or wrongness of thesis is irrelevant due to the masterful grasp of the totality of context.