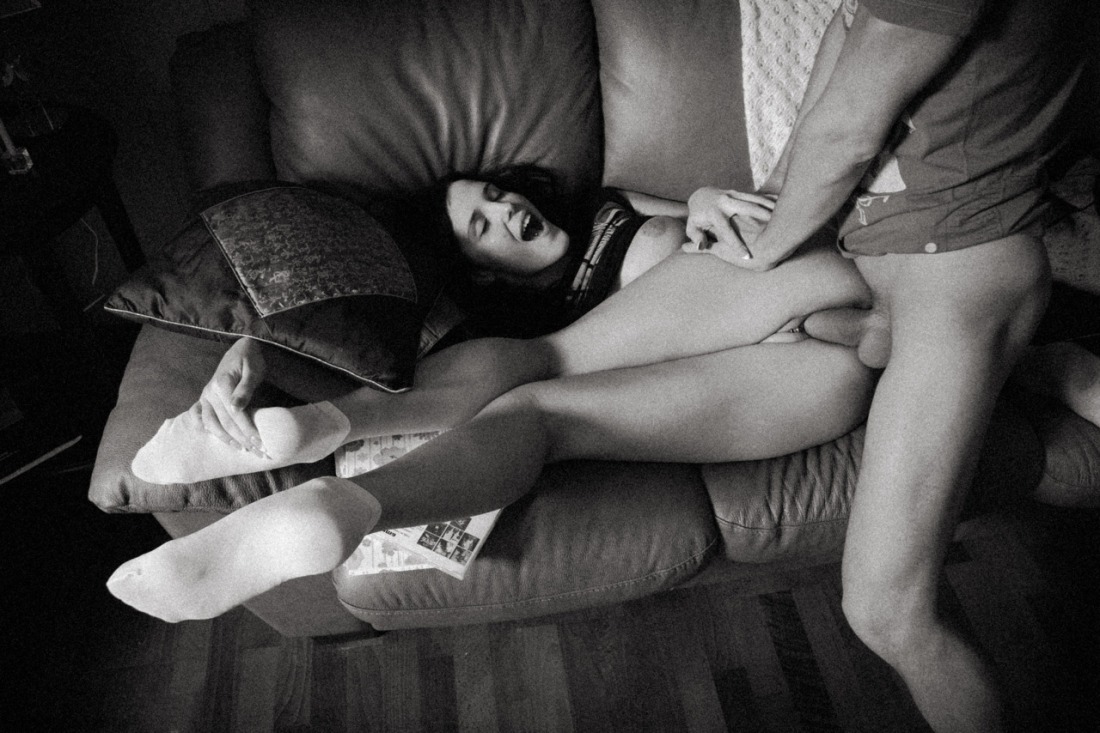 This is an interesting picture. I’d have preferred if it were a bit more evening exposed–all the shadow detail in her hair is gone whereas there’s still hints of detail in the cabinet or table to the left of the couch; also, if the camera had been raised perhaps a foot and moved back by a foot, you’ve have gotten both of them more or less fully in frame and enhanced the visual dynamism of the shot.

And as nice as I think the little details are here–i.e. her hand covering his and helping to hold her legs in position, her tongue and clitoral piercing and the books behind her legs on the couch cushion (hell, even the presentation of his erection and testicles is aesthetically pleasing)–what appeals to me about this is the question it perpetuates in my brain: is there a relationship between symmetrical representation and subjectivity?

I’m not at all certain the following applies anywhere outside my own head but I know that there’s always been this rupture or disjunction between the vision in my head and the final print. Generally, the small that rift, the better the photograph.

I think the thing is we tend to look at the world askew. The human brain is amazing at filling in blanks unbidden–sometimes to our detriment (most optical illusions are such because the brain straight up accepts its own grandiloquent assumptions on the regular).

I’ve gotten a bit ahead of myself. I need to backtrack momentarily.

Usually, I’m of a mind that there are two types of people in the world those that separate everything into two arbitrarily ‘oppositional’ extremes of a spectrum and everyone else who isn’t a pretentious douche nozzle. Yet, as blunt tools, things like Szarkowski’s windows vs. mirrors dichotomy do at least provide a set point of departure.

It’s easy to just blame street photography as the singularity from which all found images emerge. Even in rigorously constructed studio work, there’s still an element of finding in the eventual edit. Yet, I think the distinction between objective and subjective, has something to do with symmetry.

Constructed work tends to flow outward from a place of symmetry. The trouble with symmetry is… well, it’s mostly an illusion. Spend enough time with a large format camera and you’ll begin to actually see the fruit of the whole Euclidean geometery projected into three-dimensional space. (In simpler terms: try drawing an equilateral triangle on the surface of a sphere. It’s impossible.)

When I’m trying to find an image, I’ll tend to see it but when I lift the viewfinder to my eye–the thing I saw that sparked my interest disappears. I sort of think it’s because what I saw came as a result of my brain projecting a symmetry onto the scene that either wasn’t there or was merely implied by what I saw.

When I experience this discrepancy between what I saw in my mind’s eye and what I see through the lens, I’ve learned to force myself to be patient. To do the heavy lifting, to search for something approximating the symmetry I perceived initially.

On the rare occasion that I succeed in finding it, there’s a sense that the image is less an image and more a window. The image maker steps aside in order to reveal the viewer the objective experience of seeing.

In the above image, there is a literal asymmetry. It’s not so much interested in the ordering of physical space as the conveyance of the moment. Yet, in that it is very clearly subjective. The camera’s focal plane is not a window but instead an approximation of some observer’s perspective.

The thing about symmetry is that we think of it as bilateral–in other words, vertical and horizontal mirroring in one point perspective. But symmetry can exist without centering.

I actually think that is what the brilliant street photographer Paul Graham means when he says:

I have been taking photographs for 30 years now, and it has steadily
become less important to me that the photographs are about something in
the most obvious way. I am interested in more elusive and nebulous
subject matter. The photography I most respect pulls something out of
the ether of nothingness… you can’t sum up the results in a single
line.

His work is full of found images that are more window than mirror and as much as Graham wants to chalk it up to elusive and nebulous subject matter, his work shines because of the way he finds a meta symmetry that doesn’t get in your way, doesn’t distract you from what your seeing but instead functions as a feeling.