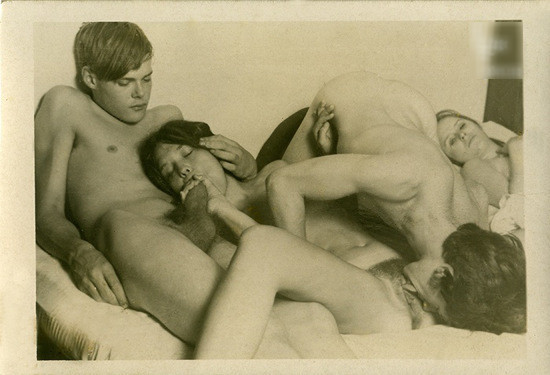 Still I like the feeling of the image–the weary-yet-curious way she’s taken his hard on into her mouth, the way he’s watching her but also gently pulling her hair away from her face so that’s out of her way allowing him and the camera an unobstructed view. I love the way her hand is pressed against the other boys side–a means of communicating her own sexual response through touch since vocal cues may not be as readily interpretable given the present configuration.

Yes, everything is staged toward the camera but not in an overly winking exhibitionist sort of way. This is another example of an image where I wish I had been present with a camera to document things. (Although I admit, my personal preference would be for the woman and the boy going down on her to switch places. (MMF scenarios with bi-men are v. haute.)

Also, something that gets me about this picture and honestly any depiction of group sex is that seem to allow for something I feel stymied by in my day-to-day–namely, they allow a safe space for those participating to perform their sexuality in a way that isn’t intrusive, unwarranted or unwelcome.

That openness is something completely absent in my life and as much as the advice is: be the change you want to see in the world, this blog is really the only means I’ve found at maybe halfway accomplishing that feat.