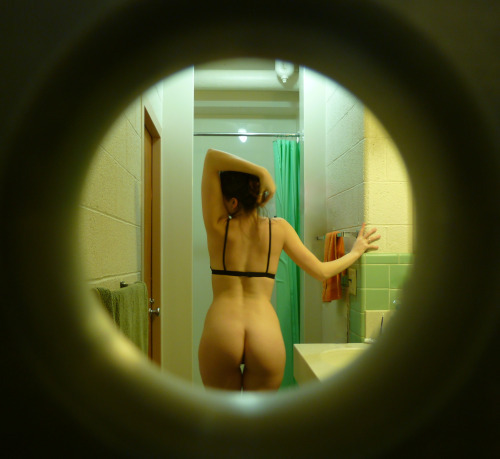 It seems the person who made this image deactivated her Tumblr–I’m pulling it from @wyyoh‘s reblog of it as part of a photoset.

I may not get this entirely right but I think Little Liza Jane was a frequent Coffee Club submitter.

As you can see from the aforementioned photoset her work while definitely a cut above the typical nude submission kind of lacks variation beyond a certain template.

That’s not to diminish the work at all. She does quite a lot within what I consider to be an aggressively restrictive form. However, the above image really does not to be singled out for it’s stunning display of creativity.

To start, I want to draw attention to the peep hole-esque vignetting. But–for now–let’s just note that it serves to render what would’ve otherwise been an ugly dorm or hostel bathroom, into something that appears as if at least some sort of cursory production design preceded the image.

Use of color has always been a feature in LLJ’s images–even if it isn’t always as readily discernible as it is here. Note: the aquamarine tile, the sea form bath curtain and the drab olive towel; the variation between the tungsten vanity light, the soft-white overhead bulb (seen reflected in the interior of the shower), the wooden door and the orange hand towel.

Together these elements coordinate to render a highly stylized but extremely appealing skin tone–something anyone who strives for a degree of photo-realism working with mixed lighting sources knows is a damn accomplishment.

But this is all superficial compared to the brilliance of the pose, the line of the bra and the way it both accentuates her back and draws attention to the one glint of light you can see between her thighs.

This image is composed in a way so as to underline the point of the implicit nudity while refusing to put it on parade.

But back to the peep hole–the pose and everything else suggest a coy awareness of the viewer. However, the audiences’ gaze is only permitted to see what the subject wants them to see.